A Most Capital Calendar Girls

Theater is changing.....and all for the better.

As evinced by this year's Tony Awards, the face of theater is changing - and I couldn't be happier. We are being treated to so much great and progressive art, be it in the form of Broadway hits like Hamilton, Shuffle Along, The Color Purple or Eclipsed, or our fabulous local productions such as Nina Simone, The How and the Why, and just about anything from Mu Performing arts or the Penumbra or Mixed Blood Theater.

A welcome addition to this increasingly diverse pantheon is the Calendar Girls, currently running at Park Square Theatre. It's a wonderful, female driven production and one that everyone should see (no, not just women "of a certain age" - I see you, trolls). The audience of all ages roared with laughter and held back tears, women and men alike, demonstrating a universal appeal - you should go, now!
Calendar Girls is based on the true story of a group of middle-aged women in Britain who completely revolutionized the world of charity calendars. The ladies get this idea after the spouse of one dies of a terrible bout with cancer. Due to his ribald sense of humor, they get the idea to raise money for a settee to place in the guest wing of the hospital where he was treated by posing tastefully nude in the images rather than insert photos of local buildings. None of them are prepared for the calendar's runaway, worldwide success, which allows them to donate far more money than they aimed for to support more research, treatment and facilities for other cancer patients. To-date, the real Calendar Girls have raised more than £3 million for Leukaemia & Lymphoma Research (click on that link to read more).

I've seen the film version of this story and enjoyed it, but something about the stage production sparked real, vibrant joy in me. Each of the actresses has great chemistry with the others and really owns her role. It was so inspiring to see a cast of women working through real life issues with real life bodies and real life solutions. It is so rare to see a show of such heart with so many female protagonists, and it left me with a long-lasting smile. My only quibble is that I would have liked to see some women of color up there too - maybe a future production can add some?
There is a lot of emotional depth to plumb in this show, and no one does it better than Christina Baldwin as Annie, the bereaved wife of John (John Middleton) and the woman whose need to act starts the whole calendar business. Baldwin and Middleton have wonderful chemistry and as Annie's grief drives the whole show, their story deeply resonated with the audience. Charity Jones is wonderful as Annie's best friend Chris and the architect of the calendar project. Shannon Custer (Ruth), Laurel Armstrong (Cora), Linda Kelsey (Jessie) and Carolyn Pool (Celia) each share their stories and provide true-blue portrayals of women, as they struggle through marital issues, aging, their children growing up, and more. This cast as a whole is so very talented, and it's really a joy to watch them not only excel in their portrayals but to have such a damn good time doing it.
The set is relatively simple, mostly taking place in the building of the Women's Institute (WI) that brings the group together. Occasionally, beautiful projections of fields and sunflowers are made to displace them into the English countryside, and it does a good job of lightening the atmosphere. Costume changes are made astonishingly quickly and all feature a wry sense of humor (particularly a choice "Bunny Rabbit" and of course the strategically positioned place settings for the calendar photo shoot). Production materials do warn of nudity, but it has to be said: this is a pretty vanilla production. Anyone who has seen 15 minutes of Game of Thrones has seen far more T and A than they will get here, so don't stay away if you're worried about that.
I was surprisingly moved by this performance and it left me longing for more shows with this kind of heart and reality. It's always fun to escape into fantasy land for a while, don't get me wrong, but it's so refreshing to see a story that actually could be (and happened to be, in this case) true. It's easy to feel starved for representation as a woman and fan of popular media, and the Calendar Girls is one of those rare stories that really does the female experience justice. It's also so great to see middle aged women who look and talk and sound like middle aged women represent themselves; no offense to Hollywood, but I don't think anyone could make an argument for reality of appearances inside that golden bubble.

So for women and men and everyone on the spectrum in between, please go see this show. It has the biggest heart you'll find anywhere, will make you laugh and cry, and generally show you the future (I hope, at least) of theater and the arts. Stage shows are leading the way to progressive representation, and I can think of no better celebration of this than a viewing of the Calendar Girls. For more information or to buy tickets, click on this link. 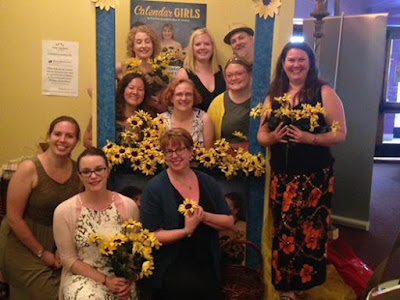 And as an additional aside: The performance I attended was the first gathering of the Twin Cities Theater Bloggers, complete with a talk back. Thanks SO much to Park Square Theatre for hosting, the other bloggers for being fabulous co-workers (I think that's what we are? Not sure yet...), and to the audience for attending! It was a great time and I hope we can organize more meet and greets and talk-backs soon.

Posted by Compendium at 2:13 PM