"benevolence" Will Blow You Over

What did you do on Valentine's Day?

The holiday seems to be one that you love or love to hate. As for myself, I could swing either way - there is no denying that the entire day is set up to allow corporations to make far more profit than is justifiable off of markups on flowers, cards, candies, and all sorts of otherwise annually available goods. That said, I also fully believe in the power of stating your love out loud, and it's not a bad thing to formalize the process of doing so.

While other people were out wining and dining and Netflix and chilling last night, my partner and I headed to the Penumbra for benevolence, the next play in their Emmett Till series (we keep it light in our house, no?). We knew we were in for a powerful few hours of theater, but little did we realize just how powerful it would be.


benevolence tells the stories of two women at the periphery of Emmett Till's death. The first act is from the perspective of Caroline Bryant, the white woman who started it all - by lying that Till came on to her, a lie that got a 14 year old black boy brutally murdered in the dark of night - and why she did it. It manages to walk the razor thin line of being complex and nuanced without being sympathetic, and there are several disturbing details released about Caroline Bryant's life that make Till's story all the sadder for their revelation. Act two focuses on the life and family of Beulah Melton, a black woman trying to survive the Mississippi Delta in the wake of Till's death. Melton's husband Clinton witnesses Till's corpse shortly before he is "disappeared" into the bayou; his inability to stay silent eventually costs his and Beulah's lives.


A tight, expert cast provides a fully fledged picture of the events of Till's death, and they do an excellent job of grounding this very serious subject matter. Sara Marsh is brilliant as Caroline Bryant. Her measured, severe performance is filled with pain and nuance; it can't be easy to play such an evil character, and I salute Marsh for her fantastic execution. She is well matched with the powerful, transcendent Dame-Jasmine Hughes as Beulah Melton. Every time I see Hughes I think she can't possibly top herself and then she does. In benevolence Hughes displays a peck of emotions with a single glance or trembling finger; she completely sweeps up the action of Act Two and is marvelously filled with gravitas. The men here are no slouch either. Peter Christian Hansen teems with deadly animosity as a revolving door of men in Bryant's life, each iteration demonstrating yet another kind of white man who provided yet another creative way to inflict cruelty on black people. Darrick Mosley is devastating as Clinton Melton and Medgar Evers, portraying yet two more black men who were both murdered for trying to tell the truth. He's a charismatic foil to Hughes' complete power, and collectively this cast will blow you over.


The set, memorably designed by Maruti Evans, is reminiscent of a macabre Declaration of Independence. A movable wall is painted with the text of news articles detailing Till's death and the ensuing trial; a row of straw panama hats hangs ominously on it, as if in the courtroom npacked with an all-white jury; and a series of plain, sturdy wooden furniture is pushed in and out of the scenery, imparting just how hard these characters are working to stay afloat. Several flickering black and white TV screens show clips of the trial and related imagery, lending the entire thing an eerie Hitchcock-ian effect. Combined with the painterly, Rembrandt-like lighting by Marcus Dilliard, one gets a chilling feeling and a sinking stomach from the second the show starts, and it doesn't lessen as the plot goes on. 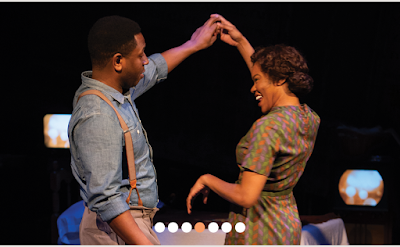 The only word I can think of to describe benevolence, over and over and over again, is heartbreaking. The story of Emmett Till is sad enough as it is, but combined with the horrific domino effect it set in motion for the rest of the black community it is completely sickening. The amount of people who have been abused, killed and traumatized in the name of white supremacy is abominable; throughout the show I couldn't stop asking myself "how can people do this to each other?!"

The worst part, however, is that people are still doing these things to each other - specifically white Americans. Police officers continue to kill people of color in the streets without impunity; it seems every day we hear new stories of people of color being unjustly imprisoned, lynched, or their children being abused; and white women continue to use the power of racism to endanger the lives of people of color with things as simple as making a phone call. It's exhausting. It's infuriating. It's endless. So what do we do now?


I'm not sure that anyone has a good answer; the problem of racism and white supremacy in America goes so deep, for so long, in so many infinitely detailed ways that it will take many, many years to uproot. What I can say is that attending the Penumbra's excellent rendition of benevolence and educating yourself about just one example of the failures of the American justice system is a good start. Learn so that you cannot unsee; once your eyes are opened, do everything you can to open the eyes, ears, and hearts of others. We must reach each person individually to help them advocate for fairness and justice - and white people, we have to do better. This one's on us. Maybe if we can make a little progress we'll be extended benevolence from the communities we've persecuted to get the rest of the way there. benevolence runs through March 10; for more information or to buy tickets, click on this link.
Posted by Compendium at 4:24 PM