Love: The Two Kids That Blow Shit Up

TKTBSU is a modern day romantic comedy with something for everyone 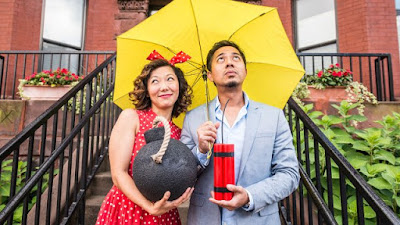 I always find Mu Performing Arts' shows so thoroughly original, highly engaging and really thoughtful. Most of Mu's performances also tend to fall in my performance sweet spot of 90 minutes or less**.

Their latest offering is a dark romantic comedy in the stylings of One Day, the enormously popular David Nichols novel published in 2009. The Two Kids That Blow Shit Up (TKTBSU) follows Diana and Max as they meet at age 10 when their parents start dating, and follows their relationship through its many ups and downs afterwards. The story jumps around between short vignettes at a variety of ages ranging from 10 to 38 and the many ways that Diana and Max support each other in between.

TKTBSU covers a lot of territory including marriages, breakups, death, divorce, theft, and other heartbreaking issues. It's this "realness" that gives the show such an edge; I absolutely loved the story. The plot is revolutionary in its mundanity, reflecting all of the pieces of relationships that we don't want to air. TKTBSU is no fairy tale, and there isn't a clear happy ending here. Rather than happily ever afters, the audience is greeted with disagreements, betrayal, death, and other disappointing or dark life events. That's not to say that this play is heavy (it's not, and there are a lot of funny moments), but the comedy is found through the portrayal difficult emotions, rather than instead of them.

Part of the show's success is due to rock solid performances from Sun Mee Chomet (Diana), who is quickly becoming one of my favorite local actors, and Sherwin Resurreccion (Max). Sun Mee and Sherwin have awesome chemistry and it truly feels like they have a deep, loving relationship throughout the show. It would be easy to let such emotional material get fraught with tension and become subject to overacting, but there is a quiet mutual respect between these two that anchors the show and the script's emotional footing, allowing them to probe the depth of the characters' relationship to each other without ever seeming trite or overdone.

The set is innovative as always. It is cleverly constructed of cardboard boxes, which are moved and dug through as the actors find new costumes, constantly shifting between their different ages or making new sets with the objects they find in and around the boxes. Scenes can include snowmen, a noodle shop, a city hall, a messy parent's home, or a grave site. The simplicity of the boxes allows your imagination to run wild. A few clever light displays cut into select boxes adds a more sophisticated element and anchors the setting and the age of the characters through each vignette. I found the simplicity very charming and it shows that you don't need a lot of fancy scenery to put on a great show.

I always highly recommend Mu's performances for the same reason, and it's this: there are few companies doing a better job of telling real life, relatable stories, particularly such stories of a non-white or non-dominant culture experience. The Two Kids That Blow Shit Up is a modern romantic comedy, one that would make a fabulous movie, and one that men and women can both enjoy. As Randy Reyes says in his director's notes:

Well, invisible no more. The Two Kids That Blow Shit Up is a great show (only showing through one more weekend!) so make sure you see it soon. It adds to the increasing diversity evident in our art and media that is finally beginning to reflect the diversity of the world around us. It's a great show and deserves a big audience - make sure you go! For more information or to buy tickets, click on this link.

**I know I harp on this but guys I mean it: You can tell a really detailed, beautiful story in a short span of time. If you can't figure out how....maybe you're not cutting judiciously enough? Long stories can be good sometimes but they should be the exception and not the rule. Period.
Posted by Compendium at 3:20 PM