It always takes a while for events to hit their stride, and this year the Ivey awards did. 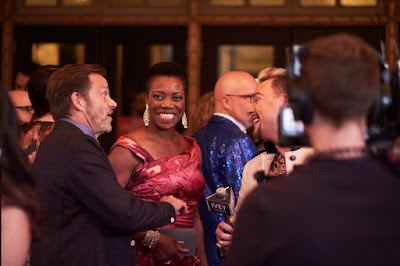 Although it's been around for 12 years it's never felt quite so engaging or well organized as it did on Monday night.

It was my third time attending and I have to say that in addition to being more fun than ever (since I'd seen more of the shows and had a great friend come with), there was also a much better mix of entertainment. The hosts for the evening, Regina Marie Williams and Mark Benninghofen, kept the pace clipping by (despite starting a few minutes late the show was done in less than two hours!) and the audience engaged. The set was simple with a creatively lit curtain placed behind a live, on-stage band. And the performance lineup was tighter and better than ever.
My favorite performance piece of the night was (naturally) "Sinnerman" from the cast of Nina Simone: Four Women, but since I'm biased I'll give best performance to a group and show I was unfamiliar with: Yellow Tree Theatre did a gorgeous rendition of "On My Way" from Violet to kick off the evening and it was a perfect choice. The vocals were gorgeous and the audience was clearly on board, giving the piece a rousing round of applause. There were also more dramatic excerpts than ever before, including a highly energetic piece from Equus at Theatre Coup d'Etat. I've always been a little scared to check out that show (something about it intimidates me for sure) but there's no denying that the performance was electric.
The rest of the performances included an excerpt from I'll Eat You Last: A Conversation with Sue Mengers from Candid Theater Company; "Goodbye My Dear" from June by Savage Umbrella; an excerpt from Emilie/Eurydice from Illusion Theater; excerpt from And So It Goes from Dark and Stormy Productions; "Rocky Mountain High" from Country Roads by Plymouth Playhouse; "Hound Dog" from So Blue by The Urban Spectrum Theatre Company; and "You Gotta Get a Gimmick" from Gypsy by Theatre Latte Da.
Overall it really was an excellent evening, tightly scheduled, accessible, and very diverse. It was so great to see such a wide range of people represented on stage, covering every race, gender, talent and more (Hollywood, catch up to theater already; they're kicking your ass in the representation department). The Emerging Artist Award winner (Trevor Bowen) this year is actually a costume designer, not an actor, which was another great moment; it's always awesome to see the behind the scenes folks represented to the public. I greatly look forward to next year's show and I hope we see more of this kind of programming!
Kudos to the Ivey Committee; they did a great job this year. And there is also some gorgeous, gorgeous art created for the Iveys this year; make sure to check out the images (which were used on the program) by clicking on this link.

Posted by Compendium at 5:42 PM