Why "The How and the Why"? See For Yourself 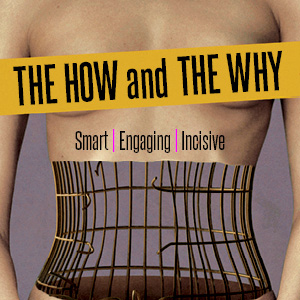 And although I may catch some flak for saying that, I do mean it. Things are going to get real in a second.

Before all that: The How and the Why is an absolutely fascinating play about the relationship between Rachel and her biological mother Zelda, who she finally tracks down after her adopted parents are dead. Both Rachel and Zelda are working in the same narrow scientific discipline of evolutionary biology, and studied at similar schools. The show follows them as they discover more about each other's personal lives and about each other's research. The script is super nerdy, getting extremely technical at points about the theories each woman has developed. I loved it, and it was so refreshing to see a productions of females discussing serious technical matters between themselves. There are a lot of deep concepts to think about after you leave, and a lot of conversation that will deeply resonate with female audience members (the theories are about menstruation and menopause).

As Rachel, Molly Pach brings an earnest emotionality to her role. She vibrates youthful, passionate energy, and she is fun to watch. Pach sparkles on stage and brings her full range to the performance. As Rachel's mother Zelda, Caroline Kaiser anchors the play. She does a wonderful job with steering Rachel even though they know little of each other, and she radiates emotion without a word. Several times Kaiser even comes to the brink of tears, and her nuanced, brave portrayal of a woman who gave up everything for her career is truly touching and unexpectedly sympathetic.

There is a lot to recommend The How and the Why. It's tagline Smart | Engaging | Incisive is apt, and it touches on loads of issues that are important to women but aren't always talked about by, to and for women themselves: abortion, single motherhood, performing well at work in a field dominated by men, breast cancer, strained mother/daughter relationships, getting your period, menopause, and more. It's very nearly an all-female show: the director, author of the play, actors, and most of the production team are all women. In many ways it is so progressive, and it's so important for shows like this to be produced. I think everyone, male and female, should see it, and there's no reason not to - tickets all run under $20 per person.

However, the only time people of color are mentioned (in this case, an African tribe called the Hansa), they are literally called savages. And that is such a shame.

It ruined the show for me. One line. I almost walked out. And that sucks.

I know how nitpicky this sounds, that one line, literally one word, could be that tough. "It's just a joke," I can hear you saying now. "Who cares? It's one line." Most of the audience laughed; why couldn't I?

I think it's such a shame that a show that is working SO HARD to be progressive, that is right on so many fronts, pushing so many boundaries, can be so colonial in it's thinking when it doesn't directly apply to people who look like the main character/writer/director. And that's what I mean by white feminism: There is so much good to be found here but at the end of the day it's meant only for a Certain Kind of Woman. Many people could dismiss all the good the production creates based on that one principle. And I just don't want to buy into that concept.

Additionally, isn't it the mission, spoken or non, of most theaters to bring art to as many people as possible? More and more audiences, productions and reviewers are noting (and lamenting) just how non-diverse they are thanks to huge hits like Hamilton. Sure, financial access is part of the reason that audiences tend to be so white - any glance at general demographics reveals this - but that is not all of the problem. Maybe part of the problem is that people of color don't feel included in the mainstream world of theater, thanks to scripts that equate them to savages. There is a reason Minnesota is known as the king state of microaggressions: we. can. do. better.

This all being said: SEE THIS SHOW. I mean it. It's really good. It is complex, it is visceral, it gets so many things right. It is far and away the best thing I have seen in the New Century Theater, and the production and Hennepin Theater Trust should be proud of the work they have put on.

Just please, when a cultural group is called savages: don't laugh. It's not funny. If the chance happens, campaign that it be written out of the script. It's 2016 guys - we don't have room for that anymore.

For more information about the show and to buy tickets (YOU WANT TO BUY TICKETS, THIS SHOW IS GREAT), please click on this link.
Posted by Compendium at 3:38 PM