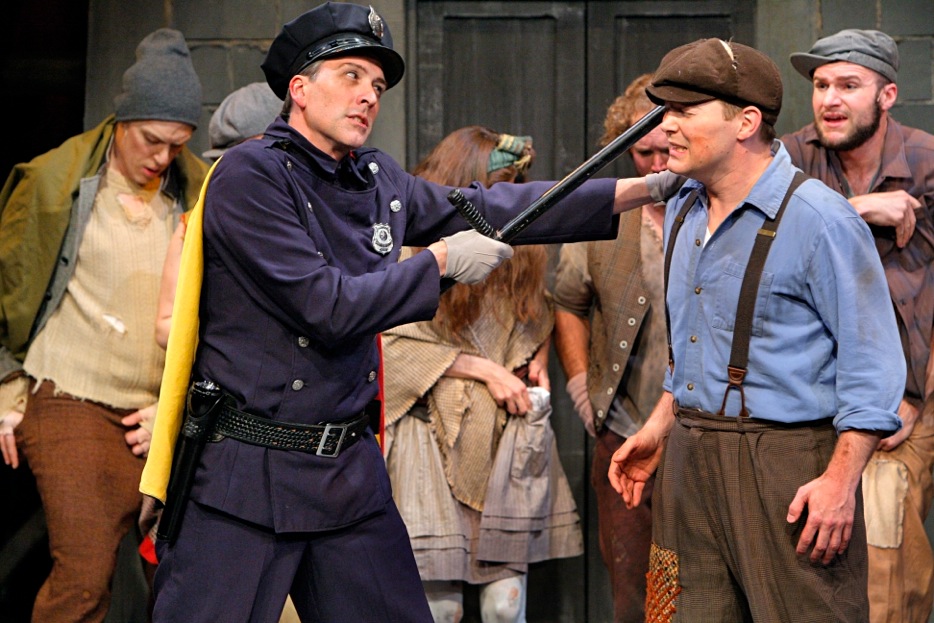 It’s a long established truth of fantasy and science fiction that placing difficult contemporary issues into an unrealistic or otherworldly setting gives them clarity that is not as easily seen when viewed through a more ‘realistic’ lens.

Urinetown, the Jungle’s newest romp, is a shining example of this truth. Filled with witty symbolism and candy coated harsh realities, Urinetown does an exemplary job of shoving our noses into awareness of a political system that is currently, well, shit.

Public Amenity No. 9 a locale facing a devastating drought that has been ongoing for decades. Cladwell and the Urine Good Company (UGC) have long been in charge of water management, thereby controlling all the citizens of the public amenities throughout the city. The UGC’s harsh tactics, high fees, and resource stinginess create a corporate resentment among the citizens reminiscent of Les Miserables or Occupy Wall Street.

The cesspool of ill will towards the UGC finally boils over when Bobby Strong, a low level UGC employee, sees his father sent to Urinetown (the UGC’s penal colony and ultimate sentence) to be punished for refusing to pay the water fee. Strong leads the residents of Public Utility No. 9 to revolt against the UGC, who in the process capture Cladwell’s daughter, enrage a policeman, become inspired by a young girl named Sally, and  experience further misadventures. I won’t risk spoiling the ending, but it’s a refreshingly depressing reflection on the near impossibility of providing good quality of life and responsibly managing natural assets in a world where any resource is scarce.

The cast is a musical tour-de-force, creating the auditory equivalent of a harmonic mortar blast with every tune. They’re a delight to watch and their standout vocals keep the audience whizzing from number to number. It’s difficult to choose a best among the great range of songs, but standouts include “Urinetown,” “It’s a Privilege to Pee” and “Don’t Be the Bunny.”

As always, Jungle regular Bradley Greenwald is a true delight to watch as Officer Lockstock (as seen above). With a wry smile and a banging set of pipes, he is the perfect anchor for the cast, and he carries them and the show with aplomb. 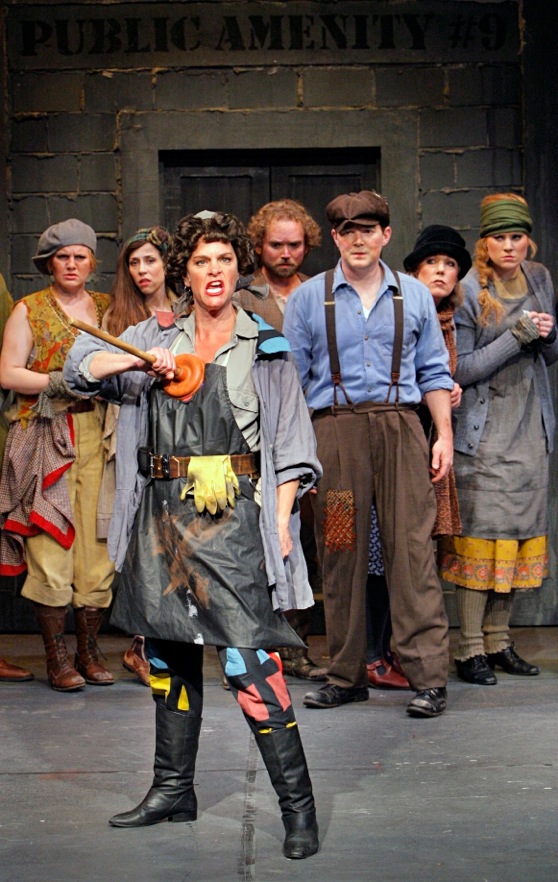 Kersten Rodau (Penelope Pennywise, left with plunger) and Elisa Pluhar (Little Sally) are equally exciting to watch. Both have clearly digested the souls of their characters, and they provide an ear blistering vocal counterpart that parlay’s the show’s snide sense of humor into gut splitting territory.

Patrick Morgan is fine as Bobby Strong, though he has an occasional tendency to over sing. Tiffany Seymour is appropriately sunny as Hope Cladwell, and Gary Briggle an inspiringly nasty overlord as Caldwell B Cladwell.

The Jungle provides a truly unique space to see a musical – traditionally with a gangbusters production like Urinetown, the audience would strain from balconies to see the action. The Jungle’s small space, however, provides an amazing viewpoint from every seat that can be lost in a larger venue. The sound production is also fantastic – each voice can be heard even in ensemble numbers, and the fantastic orchestra leads their way.

Urinetown is one of the delights of the summer and a wonderful respite from the sticky humidity and power outages Twin Cities residents are enduring, making Urinetown’s overt symbolism even harder to ignore. I highly recommend it to any and all, for both a great escape and a chance to thoughtfully reconsider how our system works today.

For more information about tickets or the show, please click this link.
Posted by Compendium at 3:34 PM No comments:

Sunset Boulevard's script retains the film's charm, but loses some of the tragic spark in musical form. 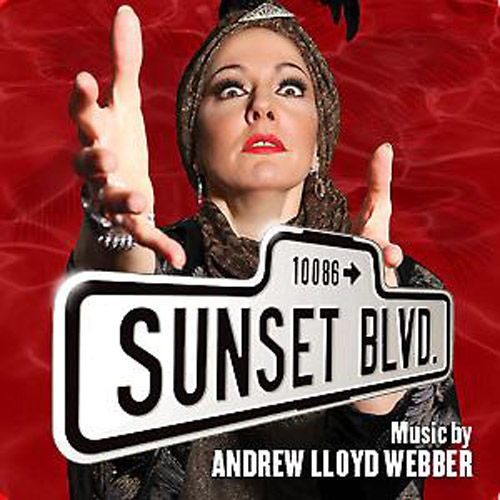 There are ideas, and there are Ideas. Big Ideas can make or break a show, especially one an audience is familiar with in some other generation - a classic off-Broadway run, a film, a TV miniseries.

Sunset Boulevard unfortunately appears to suffer from the latter syndrome.

Many readers are probably familiar with or have at least heard of the iconic 1950 film, directed by Billy Wilder and starring Gloria Swanson in the role of a lifetime.

In short: A destitute screenwriter accidentally trespasses at a ghostly mansion on Sunset Boulevard while running away from a loan collector. The mansion happens to be the home of forgotten silent film goddess Nora Desmond, who believes she is still the world's greatest movie star despite 20 years of no work and staying out of the public eye. Desmond desires to return to the silver screen, and hires said screenwriter to edit her comeback script. She nearly imprisons him in her home while he works, and a multitude of interesting adventures occur in the interim. There are a love affair and a side job and a host of other mini-plots that spiral out from this, but it's really Norma's narrative that makes the show sing.

Part of what makes the film so glorious is Swanson's ability to make Norma Desmond's totally batshit crazy-ness sympathetic and almost even appealing to viewers. Because Norma Desmond IS crazy - and depressed and suicidal, and honestly a terrifying foretaste of the devastating fall from grace that we see child actors making all the time these days (here's looking at you, Amanda Bynes).

Sarah Gibson conveys some this angst as Norma Desmond. But I found myself not wholly convinced by Gibson's portrayal - sure, Gibson's Norma is weird - but her performance lacks some of the poignant sadness and devastation that Norma represents.

Part of this may be that it was simply lost in translation, because this Sunset Boulevard is a musical (Idea #1). No offense to Andrew Lloyd Weber, but this is one narrative that demands to be told as a straight drama. Something about hearing this fraught story sung in awkwardly cheery tones just doesn't work.

One instance in which the music did work well was the story line between screenwriter Joe Gillis (played by Tim Kuehl) and his love interest Betty Shaefer (Aly Westberg). The interactions between Kuehl and Schaefer are the only ones in which the sung portions feel natural and even lyrically lovely. This effectively creates the weird dissonance between the Sunset Boulevard mansion's dark solitude and the cheerful Hollywood world outside Norma's abode necessary to emphasize her loneliness.

The staging also felt a little awkward. This show would have been served best with a nearly full projected set and very few props. Instead, it features a relatively elaborate set framed by two mystifying projection screens (Idea #2). From time to time the screens feature live closeups of Gibson rather than rotating stills of mansions, which seemed a wasted opportunity. The concept of miming the silent film prowess of Norma's character is great, but filming her sporadically (and in color!) ends up being more distracting than effective.

There are good bones in this show, but it's an awkward portrayal and not a great fit for a musical. That being said, it's taking New Century Theater in a new direction, and it's exciting to see people playing with classic stories and tropes, however unsuccessfully they may do so. I also appreciate that Minneapolis Musical Theater took a chance on the staging - it's not often enough that we see companies trying to truly stretch their stagings. New Century Theater is a fun and different space, and Sunset Boulevard is definitely a destination for anyone looking for a new musical adventure.

More information about tickets and the show can be found here.
Posted by Compendium at 2:22 PM No comments: