"Out There" with Clement Layes

Never ask "why?" at the Walker.

As an avid devotee of their "Out There" series, I have learned that it is best to lay all pre-conceived notions of the structure or content of a show at the door, instead leaving my mind open as a blank slate to whatever it is I'm about to see.

And it's a good thing I did when watching Clement Layes in his one man show Public in Private. With 35 of the 45 minute show performed in total silence as Layes inexplicably paced the stage with a water glass on his head, continually dumping water into and out of buckets, bottles, and jars, wiping a chalkbboard, soaking up puddles, and rearranging a table nad a samll plastic tree, there was little else to go upon.

Essentially a living infographic, Public in Private can be virtually summed up in Layes' brief monologue at the end of the show, which finished with these words:
"I work, I sleep, I dance, I'm dead." 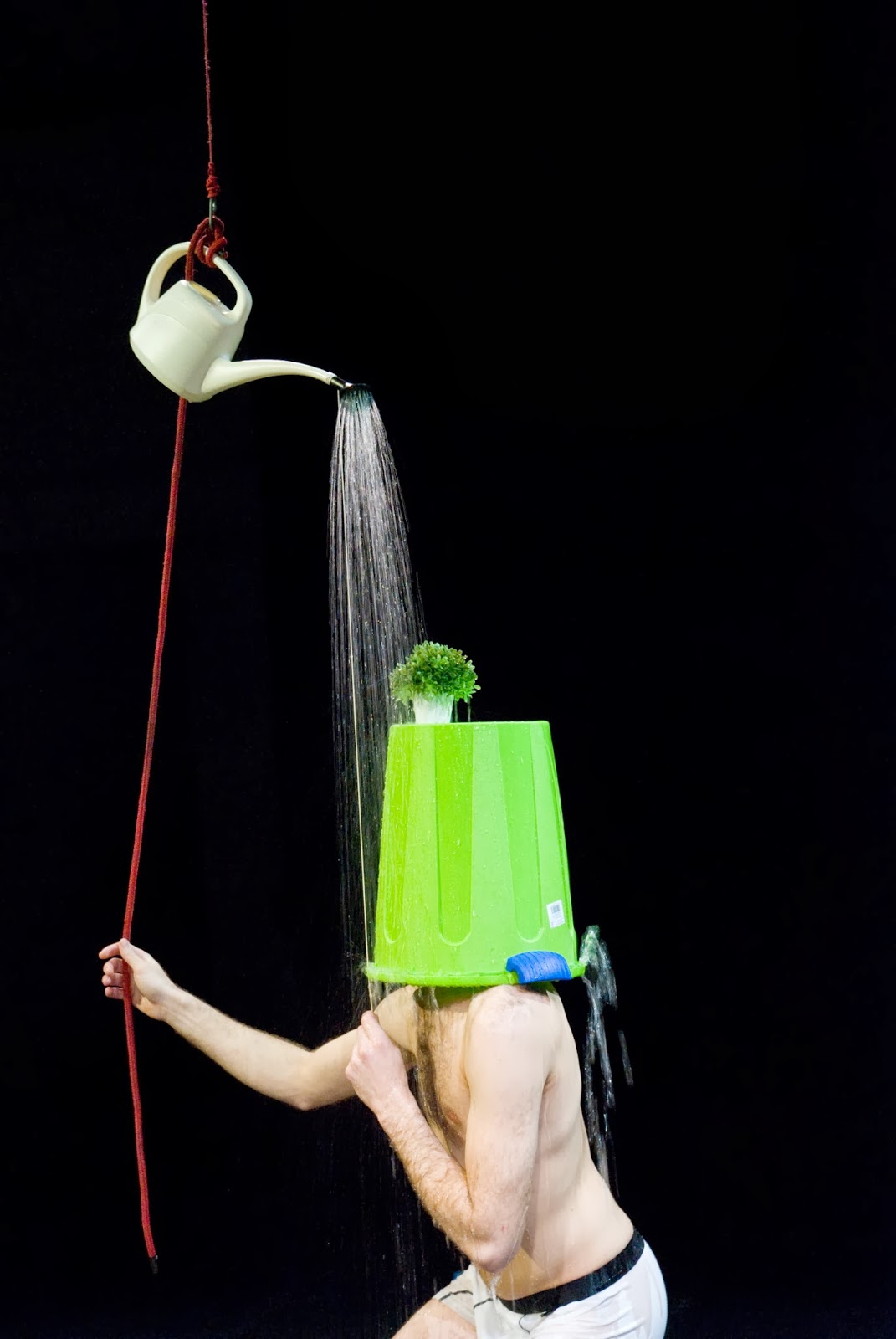 Public In Private is really a series of symbolic, metaphorical equations which use time, attention, mechanics, technology, and life - among other things - to explain virtually any natural phenomena or experience. It would help the audience immensely to have an infographic or pictorial definition of the meaning of each prop, but as it stands, is still a totally new way to convey a political message, merging spoken word, lighting, sound, movement and novelty into an engaging sequence.

A delightful experiment in terms of theatrical possibility, "Out There" is required viewing for avid theater goers, introducing them to new and endless ways live theater can be portrayed and stories can be told. "Out There" is currently performing its final show; for more information, click on this link.
Posted by Compendium at 11:35 AM No comments:

Peter Rothstein's magnificent adaptation of the classic musical is a must-see show.

How would you behave if the world was ending?

The question may seem silly or extreme, but it was a real one facing Germans as they neared the end of the Depression, the rise of Hitler, and headed towards another (but unthinkable) world war. Their answer was often to live brashly and vivaciously, as told magnificently through art, theater, and film.

Sandwiched between two world wars, Weimar Germany is often forgotten in history lessons that focus on the American experience of the great Depression - which is a pity, considering how rich and utterly unique a subject it is. Thankfully, the world of music theater remembers.

Cabaret is a complex, fascinating snapshot of life in Berlin in late Weimar Germany, where sex and politics were boiling in every crevice of the city. Led by a clownish Emcee, the audience creeps through Berlin's seedy underbelly as we follow Clifford Bradshaw (Sean Dooley), an aspiring American author who lands at the Kitty Kat Club in the middle of this turbulent environment. Cliff engages in a doomed relationship with nightclub performer Sally Bowles and unhappily witnesses the rise of Nazism before returning to America. It's a sad story, although true (at least in its larger political details), and an enlightening exploration of human nature.

Tyler Daniels (last seen stealing the show as Fyedka in Fiddler on the Roof at Chanhassen) is dynamite as the Emcee, finally starring in a role that can display his incredible talent (as a notable aside: you can understand every. single. word. that he sings). As usual, Daniels' voice is gorgeous, lubing up the audience to allow the final harsh realities of the show to make a softer landing. He's particularly good in the show's best number "I Don't Care Much," in which he slithers through the song while performing acrobatics on a swing flying above the tense and violent action on stage below him. Daniels takes his time through every scene, making the high paced action feel as if it's just another stroll in the park. He makes it look easy, and every moment is sinfully delicious.

The rest of the cast are no schlumps, either. Kira Lace Hawkins lends a Chicago-an Catherine Zeta
Jones flavor to Sally Bowles, with a riotous voice and saucy British humor. She's delightful and a perfect fit. Veteran Sally Wingert is excellent as Fraulein Schneider, and although her singing never quite catches up to the rest of the cast, she is the solid moral ground that the show stands on. James Michael Detmar is heartrendingly winning as Herr Schultz and a wonderfully hopeful foil to Wingert's realistic pessimism.

Rothstein's direction is precise yet expansive, with the show clipping along at a little over two hours (not including intermission) yet never feeling hurried. In fact, that is probably one of the most remarkable elements of this Cabaret; with the enormous range in musical numbers, costume changes, plot twists, and so on, it never once feels rushed, instead letting the audience luxuriate in the complex incongruity that the world of Weimar cabaret requires.

The set is lovely, equal parts Moulin Rouge and Chicago, and it's used acrobatically to great effect. It helps that this production is in the Pantages, a spectacularly gorgeous theater that was used for vaudeville and closed in 1930 as the world of cinema swept the country (don't worry; it was beautifully renovated in 2002 and is worth the trip alone). Costumes are changed constantly and are about as suggestive as it gets (if you're not a fan of unconcealed ass or the bra-less, this is not for you), lending a necessary flash of color to the otherwise muted set. Mention must also be made of the superb lighting, which made the stage appear water-colored at all times.

Since seeing is believing, I encourage you to check out either of the Hennepin Theater Trust's great videos behind the scenes as Cabaret was rehearsed. This one features Micheals:

Cabaret is equal parts campy hilarity and heart-tugging realism, and absolutely a theatrical highlight of 2014. Be sure to check it out (it runs through Feburary 9); more information can be found by clicking on this link.
Posted by Compendium at 11:00 AM No comments:

"Out There" with "The Room Nobody Knows"

If you want to see magical realism from an Eastern perspective, look no further than Niwa Gekidan Penino's The Room Nobody Knows.

I jest somewhat, but there really is a Guillermo del Toro-ness to Penino's play that simultenously lends it a familiar yet impossible feel.

Set inside the dreams of a young man,  The Room Nobody Knows portrays everything from prison like cells to horned elf-slaves to ubiquitous phallic imagery to a highly eroticized relationship between two middle aged brothers. It's entirely in Japanese, entirely improbable, and entirely captivating.

It is highly probably that the world Niwa Gekidan Penino has created for The Room Nobody Knows is unlike anything you've seen on a stage before. The horizontally split set is at once jarring but fascinating, and something I'd like to see more productions use. The vertical interplay (rather than the typical horizontal staging with asides) lends itself to creating the dream effect, suggesting an almost Inception-like quality.

At a brisk 60 minutes long, it's an in-and-out kind of show, but one that will leave you pondering for much longer. The Room Nobody Knows is a Japanese twist into the world of magical realism and fantasy - check it out if you get a chance.

With the end of Penino's run, the Walker's "Out There" series is halfway complete. A delightful experiment in terms of theatrical possibility, "Out There" is required viewing for avid theater goers, introducing them to new and endless ways live theater can be portrayed and stories can be told. "Out There" runs through the end of January; for more information, click on this link.

Posted by Compendium at 5:59 PM No comments:

"Out There" with Wunderbaum/LAPD's "Hospital"

The Walker is known for nontraditional performances, and Wunderbaum/LAPD's Hospital production fits right in.

Equal parts spoof of the fetishization of the medical world in television (a la Grey's Anatomy) and serious commentary on flaws in the international health care system, Hospital touches on everything from birth/labor to accidents to emergencies to end of life care. Told essentially through the perspective of John Malpede, Hospital weaves the medical staff and personal experiences that Malpede encounters as he ages into a larger timeline of healthcare milestones in America (think Medicare being installed, the creation of the HMO, Obamacare, etc.). Politics are also obviously involved, perhaps culminating in a (rather confusing) "cameo" from Ronald Reagan.

What could be Hospital's selling point and most powerful argument for a more comprehensive healthcare system (Malpede's personal struggles with lack of healthcare coverage and the sky high cost of medical care) is also unfortunately its Achilles heel. Malpede gets consumed in his own narrative, and as the play progresses he sounds less upset about legitimate flaws in the system and more like someone who is frustrated that no one is taking care of him. There is an endless amount of examples of ways the American health care system has not served its patients well, but it seems a bit odd for someone who appears rather proud to not have purchased healthcare for himself as a young man to then complain that young people today are not participating in a healthcare system that would subsidize him now in older age. Just a thought.

As far as production goes, however, Hospital is exciting. The use of videocameras in particular is fascinating, with action-packed scenes co-existing with close up camera zooms that give viewers an intimate view into what patients and doctors in extremely tense conditions must see. It's the closest I've seen theater come to a television medical drama, and it's fantastic.

The acting is a mixed bag (the Dutch component (Wunderbaum) is a professional company; LAPD is not quite as much), but it's enjoyable regardless. Several of the Dutch actors lend a much needed comedic flavor to Hospital, and it helps lighten the heavy personal load Malpede drops on the audience.

The Walker's annual "Out There" series is always a delightful experiment in terms of theatrical possibility. Even when featured shows aren't the most enjoyable, they open your eyes to the endless ways live theater can be portrayed and stories can be told, and for that, it's a must-see. "Out There" runs through the end of January; for more information, click on this link. Or, for a visual sampling, check out the video below.

Posted by Compendium at 8:30 PM No comments:

This is less a post than it is to pass along an article about an amazing new artist over at PolicyMic.

Ramiro Gomez displays an almost Cindy Sherman-esque gift for messing with perception. Although his work is arguably more politicized, and he uses paint instead of straight photography, it's still a magnificent commentary on the differences between classes (and races, and employment substrata) in America today.I'd encourage all of you readers to check out the excellent article (linked below), as well as look into his work further.

Check out the full article here.
Posted by Compendium at 12:20 PM No comments: