With the set of a lifetime, this show is a must-see.

Remember what I said about not fixing what ain't broke? Yeah, screw that.

Because what Cameron Mackintosh has done to bring Phantom of the Opera (which, at 25 years and counting is now the longest running Broadway show of all time) into the 21st century is absolutely incredible.

I've been pondering why I liked this so much more than the recently updated Wizard of Oz, and I think it's that the new Phantom is truly an upgrade. It feels sumptuously luxurious - so luxurious, in fact, that you have to pinch yourself consistently while you're watching to make sure you're not dreaming. 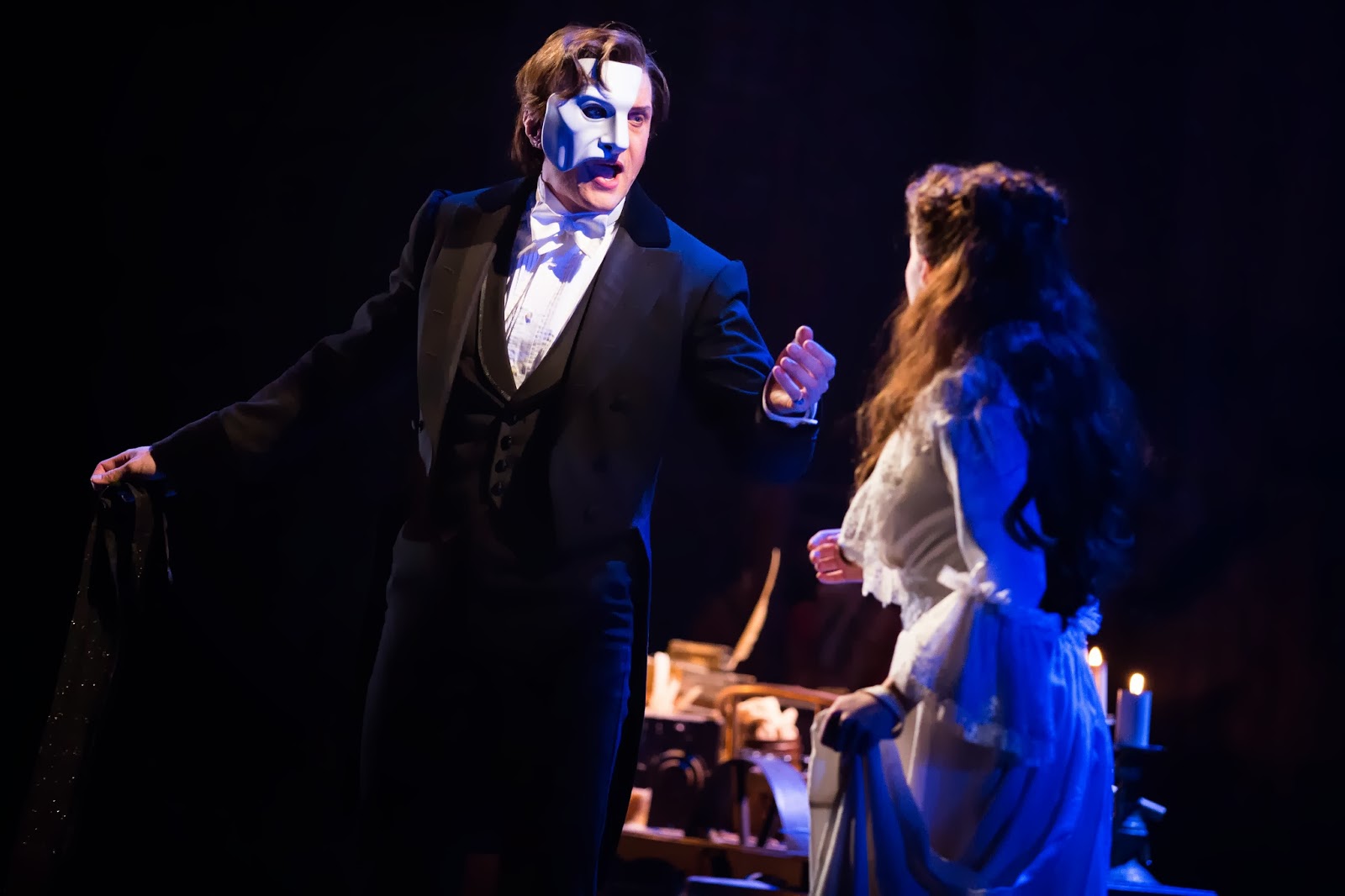 novel of the same name. It eliminates some characters from the book (which is highly worth reading, btw), but retains the romantic heart of the plot: beautiful Christine Daae learns to sing from a mysterious Opera Ghost (Phantom). When the opera's management shifts hands, she becomes a headliner and simultaneously the object of desire and jealousy for the Phantom and the opera's new patron, Raoul. Things begin to spiral out of control as the Phantom and Raoul vie for Christine's hand, climaxing in a showdown in the Phantom's lair deep beneath the opera.

It's a tense story, with riveting action sequences, lush dance, opera parodies, explosions, boats, swinging chandeliers, and a great, organ-filled score. The cast here holds their own, including Mark Campbell as the Phantom and Julia Udine as Christne Daae, and as always the primadonna Carlotta (Jacquelynne Fontaine) is a crowd favorite.

But to be honest, there is only one reason, and one reason alone, that you should see this show:

Oh my god, the set. It is hands down, no-doubts-about-it the best set I've seen anywhere in my life. I'm still beating my brain trying to figure out how this production is able to travel with the sheer enormity of each set piece, but it doesn't really matter - all you need to know is that it's spectacular. 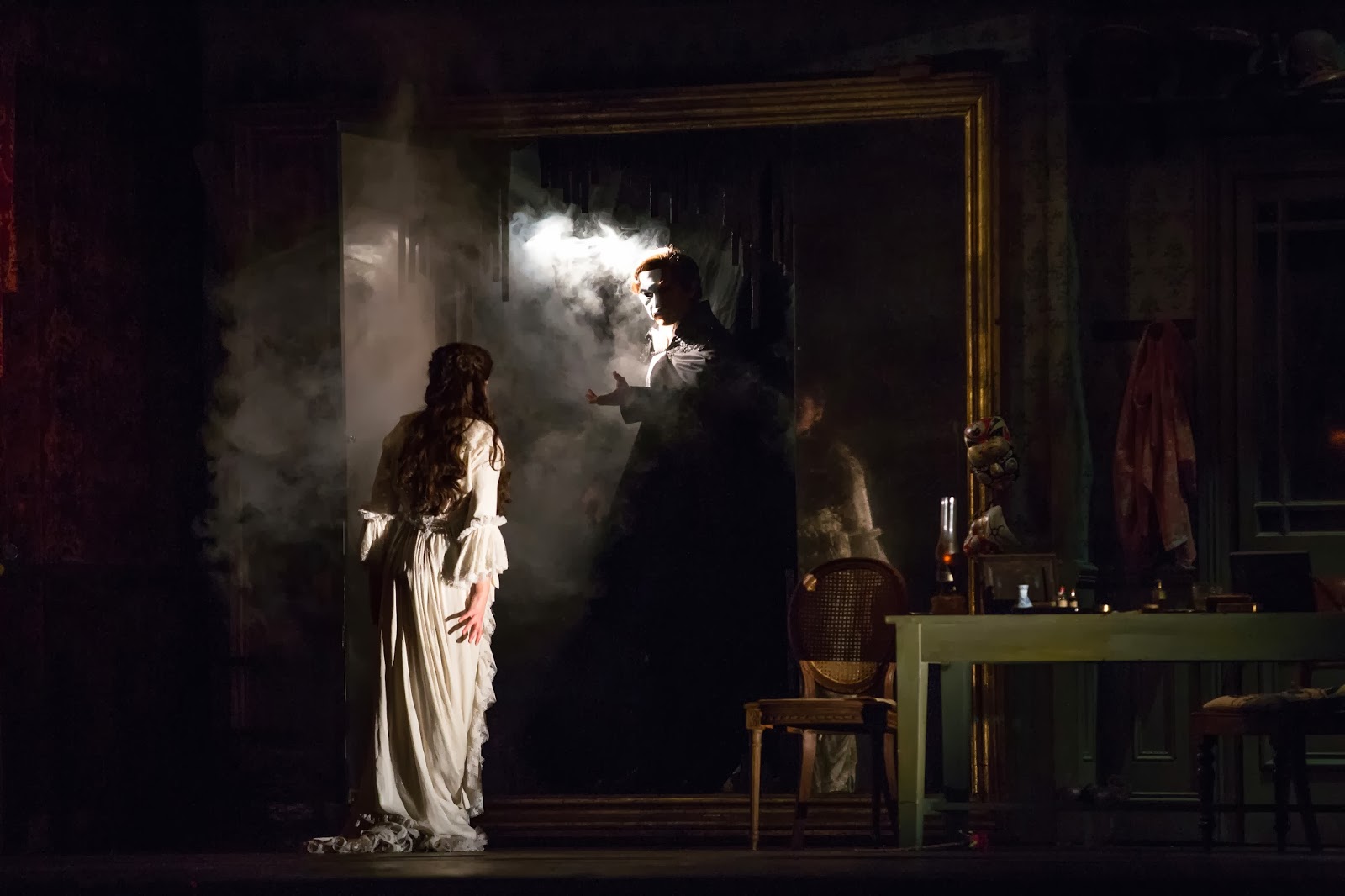 There is a fullsize gilt framed opera house, life size replicas of Parisian statues and cemeteries, the chandelier (which drops over the audience, of course), ceiling-mirrored ballrooms, and more. My personal favorite is the path to the Phantom's lair, which now not only involves the boat floating across the lake but a descent down a stairway that grows in and out of a massive wall set, almost as if it's an alligator disappearing into a lake. I've never seen anything like it, and it's unforgettable.

Long story short? Long-running shows like The Phantom of the Opera can begin to feel stale, boring, and not worth seeing if you've already seen a production elsewhere. That is not the case this time; it's worth every penny if you can get a ticket, and I'd even go twice if I could. Please, please check it out - you won't regret it. For information about tickets and times, click on this link.

And, for a look at some of the physical updates (although the cast is not the same as that of this Minneapolis production), check out the following video.

Posted by Compendium at 6:15 PM No comments:

An updated "Wizard of Oz" retains some of the classic film's sparkle, but new additions can bog it down.

What is that famous phrase? "If it ain't broke, don't fix it."

I feel no phrase applies better to Andrew Lloyd Webber's update to The Wizard of Oz than this. I may be alone in my feelings, but the addition of several new tunes and the seeming burdens of technological practicality on traveling stageshows didn't leave me with the wondrous feeling I have come to expect from the great Wizard.

I will assume all readers have seen, or at least heard enough of, the extraordinary 1939 film to relieve me of having to repeat the plot (and if not, SHAME! Go find a copy immediately, lock yourself in your apartment, and don't leave until you've seen it at least five times and cried frequently about the years you've spent in ignorance). I suspect the entire draw of even concocting a stage show is the special effects, so we can start there.

Wizard's blessing (and unfortunately, curse) is its heavy use of the projector/scrim combo. In terms of creating a sepia effect for Dorothy's time in Kansas, it is spectacular; combined with an awesomely, bafflingly 2D (but interactive) set, it provides a gorgeous backdrop for the home-front.

Oz, however, does not fare so well. The scrims, so convincing and movie-tastic in the Kansas
portions of the show, begin to edge into Douglas Adams territory, sweeping Dorothy's house through space (?!) to Oz, showering colorful rainbow sparkles on things, and generally just becoming the go-to for any bit of "magic" Oz has to offer. Which is a pity - we know from shows like Mary Poppins, Wicked, Beauty and the Beast, and yes, even the Lion King, that it would be possible to have the Wicked Witch or her monkeys fly over the audience, Glinda arrive in a bubble, Munchkins actually be sized like Munchkins, and "animals" wear more than fuzzy pajama suits. I'm not sure if it was bedazzlement from the projector/scrim technology, or a fear of having to haul 'too many' set pieces, but there's a lack of real life wonder in this production, the "how the hell did they pull that off?" that makes Broadway so magical to all. If any show deserves it, it's this one, and I didn't find it here.

That being said, this is far from a dud, and some characterizations are especially appealing. As the Cowaradly Lion, Lee MacDougall provides some much needed comedic relief, and is clearly the sweetest of Dorothy's three wise Ozians. The surprising stereotypical 'gay' edge he adds to the Lion is also a funny twist.

I found Danielle Wade's voice a little more "Ariel" than "Dorothy," but she grew on me as the play continued, and far and away I found her the most "authentic" to the movie of the cast. It didn't hurt that she carried an adorable live Toto with her at every turn, but her voice is lovely and winsome and just what the Wizard ordered.

Mike Jackson does a stellar physical portrayal of the Tin Man, even if his vocal characterization falls flat. And Jacquelyn Donovan is disappointing as the Wicked Witch - nowhere near shrill or terrifying enough to convince you of her evil power.

Musical standouts included a gorgeous reprise of "Somewhere Over the Rainbow" in Act 2, and a couple of the new tunes ("Bring Me the Broomstick" and "Already Home") also fit in well. "Hail-Hail! The Witch is Dead" featured excellent choregorpahy, mixing a wide range of tangoes, Russian stomp dancing, acrobatics and more for a visceral piece.

The long story short: take your kids. The Wizard of Oz is made for kids, and they will have a great time (whether there's too much scrim or not). If you can only afford to see one show this year, I'm not sure this is the one you'll want to see - but it's still worth a look if you can make it. After all, it is the Wizard of Oz.

You can find information about tickets here.
Posted by Compendium at 10:16 PM No comments: