The crowd went wild for Franki Valli and his crew 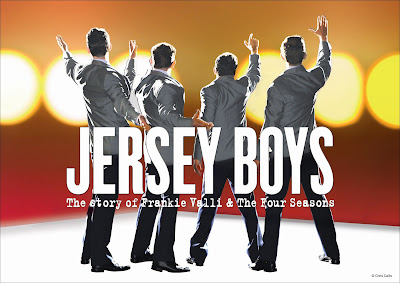 For those who love popular music, there are few bigger hits than Franki Valli. Although many today would have trouble recalling a photo of one of pop's most consistent heavy hitters, it's likely that almost everyone in America knows at least some of the words to one of his tunes, or at the very least his unbelievably high voice. Among the hits are:
So it's natural that a Broadway show about Valli and the band that made him famous, The Four Seasons, is a hit parade. Audiences have loved it for years, including a film version released by Clint Eastwood last summer.

Unfortunately, this Jersey Boys read more like a Wikipedia entry than the groovy concert I was hoping for. Much of this is likely due to the insanely difficult nature of Valli's role (played with mixed success by Hayden Milanes); his vocals are so deceptively hard, often beginning out of pure silence, that I imagine it would be nearly impossible to find someone to play the role consistently if it played more like a cover concert, especially in the grueling environment of a touring show.

Still, there was a lot of fun to be found in this show, and the audience adored it. The fellow Four Seasons (Drew Seeley, Matthew Dailey and Keith Hines)  were a pleasure to listen to and had great chemistry, and the action moved smoothly throughout the spare set. If you can manage it, make sure to get a ticket; you won't regret it.
Posted by Compendium at 4:44 PM No comments: