Jitney at the Penumbra

I forget sometimes what an embarrassment of riches the theater community in the Twin Cities is. 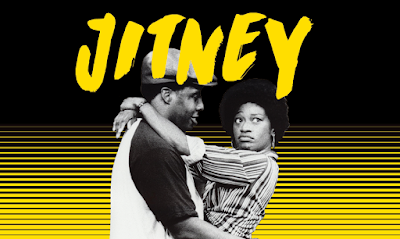 I've seen a whole lot of shows in the last few weeks, more than usual, and I keep coming away from them with profound reactions. There is a movement of late to provide audiences with meaty, poignant pieces, often addressing themes (particularly political and racial) that affect us today. I don't want my reviews to sound like a broken record...but I am being honest! We have so many awesome companies in this area and the bar has most definitely been raised. There is consistently excellent work making the rounds, and it's a joy to witness.

Jitney, the August Wilson-authored and newest offering from the Penumbra, falls right into that category. Refreshingly set outside of the better-known periods of twentieth century, instead falling squarely in the mid-1970s, Jitney details the stories behind the men who work as drivers in a jitney* shop. Main plot lines follow Becker, the jitney shop owner, and his son Booster after Booster is released from jail; Youngblood, a young driver, and his girlfriend Rena as they navigate their relationship and financial woes; Turnbo, a driver who can't keep his nose out of everyone's business; and other colorful characters such as the driver Doub, pimp Shealy, and Philmore and Fielding, who have struggles with substance abuse. 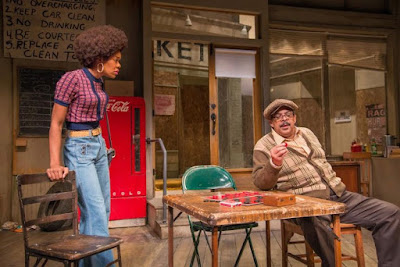 Two very striking things about the show: 1) this is definitely a period piece, set squarely in the mid-1970s. This was rather delightful for me as we don't see a lot of art set in the 1970s; it also marks a time of stark transition in America for black communities, and Jitney feels like a realistic snapshot of the challenges faced at that time; and 2) this is the most raw language I've ever heard flow from August Wilson's pen. There is no holding back; pimps and hoes, n*****, and all manners of cuss words are strewn throughout this show. As they are used appropriately, as any good profanity should be, they are jarring to hear thrown at the audience. We're not used to hearing colleagues and friends refer to each other in base ways. We're not used to seeing the real effects of trickle down economics, race driven drug policies, segregation caused by the interstate highway system, or system-wide gentrification staring us straight in the face either. All alone, those problems may seem serious but they remain abstract. Jitney jumbles them all together and forces you to stare them in the face, viscerally.

This is the 40th anniversary of the Penumbra Theatre, and they brought back many old hands for this show. James Craven, a 35 year Penumbra veteran, anchors the show as Becker, and he's terrific. He has all the exhausted wisdom and delayed emotional processing a man like Becker should have, and the scenes between Becker and Booster are tightly drawn and fraught with frustration. James Alfred is superb as Becker's son Booster; he brings an unrepentant pride and fierce tribalism to his role, and although we are a little scared of Booster's past and what he might intend for the future, we cannot help but respect his undying strength, thanks to Alfred's inspired portrayal.

Terry Bellamy, an original founding member of Penumbra, is unbearably convincing as Turnbo. I say unbearable because the character IS unbearable, repeating all manner of sexist, misogynistic, small minded nonsense that in today's political climate would not sound out of place. Still, Bellamy manages to make the character somewhat sympathetic; that feat alone should speak to his talent. Jasmine Hughes, a recent Ivey Award winner for Sunset Baby, is vivacious as Rena. There are not enough female roles in this show, and I can't wait to see her in something that gives more room for her talents. Darrick Mosley is well paired with Hughes as her boyfriend Youngblood, and the most eerily contemporary figure. Youngblood's troubles fit right into our contemporary problems with adequately supporting our veterans and the unemployment rate for young people of color; he speaks directly to today's youth.

I'm not sure what I expected from Jitney, but this was much rawer, tenser, more fraught than anticipated. It made me uncomfortable in a good way, and reminded me why I like shows about ordinary folks so much. So much has been said lately about the phenomenon of Trump, but one of the most important things that still seems overlooked is simply that a large percentage of our population feels ignored - they don't see themselves in politics, or TV shows, or literature or news stories, unless they're being excoriated. The community portrayed in Jitney shares those problems, before the 1970s, in the 1970s, and today. Maybe by holding up a mirror, showing more people a real representation of themselves, warts and all, we can all find ways to make deeper connections with each other and deepen our human brotherhood. Jitney runs through November 6. For more information or to buy tickets, click on this link.

Also, as a PSA: The Penumbra is engaged in an extremely noble pursuit to register as many voters as possible for the election next month. The theater is located in a highly diverse neighborhood, and they encourage anyone interested in this cause to join and help. For more information, click here.

*A jitney is an unlicensed taxi; modern day folks might think of it as an Uber or Lyft, but without governmental endorsement.
Posted by Compendium at 11:05 PM