A Riveting Raisin in the Sun

Classics are classics for a reason.

That is immediately obvious after seeing A Raisin in the Sun, currently playing at Park Square Theater.

Lorraine Hansberry's timeless story feels more relevant than ever (if that's even possible) in this gorgeous portrayal, which features an all-star local cast. For those who haven't seen it, A Raisin in the Sun is about a black family (the Youngers) living (and trying to expand beyond) Chicago's South Side. Set entirely within their home, the story follows the matriarch Lena; son Walter Lee and his wife Ruth; and sister Beneatha throughout their daily life struggles. Other folks wander through, including Beneatha's suitors, a man from the white neighborhood the family intends to move to, Walter Lee and Ruth's son Travis, and some local friends of Walter Lee's.
Perhaps what makes this story so compelling (and heartbreaking) is its unassailable normality and the depressing nature of that reality. The Youngers could easily exist today, and their bitterness - about underemployment, exhausting physical jobs, poor health due to lifetimes of incredibly physical work, segregated housing, the struggle to climb out of one's economic class, the inability to trust your friends - is all too often represented in today's news. This is also the Younger family's strength, however; despite all obstacles and the unending sea of disappointments they face, the Youngers constantly climb back up, dust themselves off and sally forth with dignity and class. They are a family built on bedrock, and nothing can stop them.
I said this is an all-star cast, and I mean it. Aimee K. Bryant opens the show as Ruth, perhaps this production's most relatable character. You can't help but be drawn in to Bryant's warm, winning portrayal of Ruth and feel for the struggle within her as she faces a difficult pregnancy and distance in her marriage. Darius Dotch is spectacular as Ruth's husband Walter Lee. He fully embodies the role and with it gives us a full picture window into the despair being a black man in America can create, as well as the innumerable forms of strength such men possess (and is often ignored in the news). Walter Lee is an unrealistic dreamer to be sure, but he is right to be disappointed too, and provides some thunderous thoughts on this subject. Dotch's emotional, full throttle realization of Walter Lee is powerful and one of the best performances of 2016.
Greta Oglesby is monolithic as the matriarch Lena Younger, constantly bringing her family back to their roots, to their ancestors, to their honor and responsibility. She is the sun around which this world turns, and Oglesby carries the role with appropriate gravity. Am'Ber Montgomery is fiery as Beneatha, and you can see in her lineage all the protest movements, Nina Simones and Michelle Obamas who have come after her. Supporting characters such as Theo Langason (as Beneatha's African suitor Asagai); Cage Sebastian Pierre (as Beneatha's wealthy African American suitor George); and Robert Gardner (as Lindner, the representative from the white "welcoming committee" of the Younger's new neighborhood) all provide decent portrayals, and Andrew Miles is heartwarming as the grandson Travis Younger.
As previously mentioned, one of the wonderful things about this show is it's total introspection. It is set in the home, it is about inner thoughts and fears and hurts, and this is beautifully represented in the set for this piece. Perfectly evocative of the Younger's heard earned but shabby apartment, this set has a working oven and iron, period placed cleaning tools, creaky slammed doors and shallow stuffed sofas. It's worn but warm, and it perfectly sets the tone for the Younger family.
Fun fact, to provide some context: the title of this show is based on a famous poem by Langston Hughes, entitled Harlem (often referred to as A Dream Deferred). It's a worldly and clear eyed piece, including the phrase that gives this play it's name:

What happens to a dream deferred?


Or does it explode?


The disappointment of such deferred dreams is one of the reasons there is so much fraught tension surrounding Obama's presidency and the current state of progress (or lack thereof) for African Americans today, a tension we are going to see exploding in the results of tomorrow's election. No matter who wins, there will be a long way to go to helping realize Hughes - and Hansberry's - deferred dreams, ones much like that Dr. Martin Luther King expressed in a speech at the steps of the National Mall ten years after A Raisin in the Sun was published. 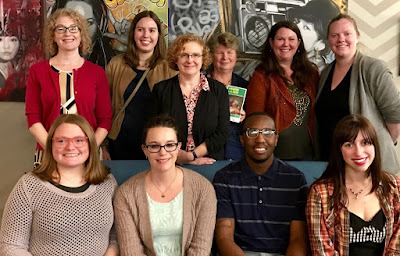 A Raisin in the Sun has been performed thousands of times, and for good reason. It is a riveting show, filled with timeless themes such as loss, racism, a sense of dignity, finding one's place, the struggle to be understood, and more. Park Square Theater's production is gorgeous, timely, and powerful. The dynamic performances will have you riveted in your seat and thinking about this production for weeks to come. Please go see it - you will be blown away. A Raisin in the Sun runs through November 20 at the Andy Boss Thrust Stage; click here for more information or to buy tickets. 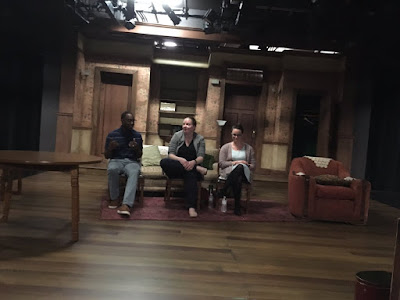 This is the second Twin Cities Theater Blogger event hosted in partnership with Park Square Theater, and we had a great time. I helped moderate a conversation after the show with Gina Musto of The Room Where It Happens and Jamil Jude of Park Square Theatre, and we had some awesome engagement with the audience. We have plenty more blogger events planned for the coming year - please make sure to follow our Facebook page and join us for our next event! They are always presented in conjunction with thought provoking, excellent local theater, and you definitely don't want to miss it.
Posted by Compendium at 4:54 PM