Things these days are just ridiculous, aren't they? 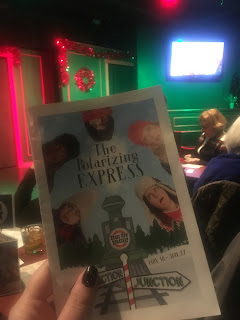 I mean you have to laugh at what's going on, or you'll go crazy. It seems like every morning we wake up to new news about something horrendous beyond imagination, and if you can't find a way to smile through it you'll never get out of an unshakeable depression.

If you need help finding the silver lining in the absolute absurdity of current events, look no further than the Brave New Workshop (BNW). The longest running satirical comedy theater in the United States, BNW has been bringing a comedic perspective to current events for more than 60 years and is the perfect place to let off some steam in the face of the outlandish state of things. BNW's current show The Polarizing Express blends the holidays and politics to provide an on-point critique and self-flagellation that will give you laughter therapy for days. Here were some of my favorite sketches:

Posted by Compendium at 1:03 PM