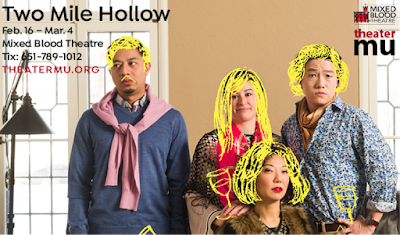 I have to say, I am absolutely loving all of the terrific comedies cycling through Twin Cities theaters lately. Don't get me wrong, I love a good drama - but with the currently contentious state of American politics let's be honest: we all could use an extended break from #reallife.

The latest offering from Mu Performing Arts, Two Mile Hollow, is a brilliant addition to the comedic wave sweeping through #tctheater. The play is a spoof of what is known as the genre of 'white people by the water,' a funny way of saying stories about super wealthy white people living in their mansions and complaining about their ridiculous sets of problems. The story features a wealthy family in their estate called Two Mile Hollow. Blythe, the matriarch, is selling the property and her daughter Mary and stepsons Joshua and Christopher have congregated to say goodbye (or more honestly to gossip about and snipe at each other). The script discusses their horrific relationships with each other as well as their uncomfortable interaction with Charlotte, Christopher's lower-class personal assistant and lover on the down-low. The big twist? These overtly privileged, prejudiced characters are played by an all-Asian cast, adding an elevated level of satire and silent commentary on their wholly ridiculous antics. The best encapsulation I can think of is that the events of Two Mile Hollow lie somewhere between Gossip Girl, Get Out and any of The Real Housewives TV series. It manages to be wholly entertaining but subversive, and the cartoony manner the actors inhabit keeps it from feeling less derogative than trenchant.


The cast for this show is fabulous and features many of my local favorites, beginning with the endlessly jocose Sun Mee Chomet. I've known about her searing comedic chops for some time and they are brilliantly on display here; she had me laughing before even saying a line, barely emerging on stage with an awkwardly dilletante carriage that couldn't be funnier. She's a riot and I only wish we'd seen more of her. Meghan Kreidler is terrific as Charlotte, easily carrying the show's moral compass on her shoulders with an emotive and piercing performance, especially at the play's close. Eric Sharp and Sherwin Resurreccion are in their best roles yet as Christopher and Joshua, respectively. Sharp's parody of a self-important movie star is guttingly humorous and performed with total ease. It's been such a pleasure seeing Resurreccion's career evolve, and he is clearly confident and comfortable with this cast, pulling out all sorts of silly antics and an unexpected but brilliant touch of pathos in his role. Kathryn Fumie is pointed as the overlooked Mary, delivering a few striking surprises in her rants.


The set, designed by Joseph Stanley, remains placed inside the cohabited rooms inside Two Mile Hollow, with beachy Nantucket vibes, a startlingly delicate house frame, and just enough props (from Abbee Warmboe) to make it feel like a retreat. A delightfully "sandy" garden planter, which became the focus of a fight over Charlotte's affections, spilled out across the stage and was my favorite element of the production design. The costumes by Joanne Jongsma could all be cropped straight from a J. Crew catalog and further reinforces the snooty attitudes of these one-percenters.


Two Mile Hollow is a fine kickoff for Mu Performing Arts' 2018 theater season. It's sharp, it's smart, and like so much of Mu's work, Two Mile Hollow does a great job of subverting traditional narratives and making its audience think without even knowing they're doing it. It's a wonderful opportunity to see some of the best of our local theater artists perform together (and clearly have a blast doing so). We never stopped laughing from the moment we sat down; what a gift it is to find such light and joy in such dark times. We could all use our own personal laugh track these days, so head to Two Mile Hollow to lighten the mood a little. Click here for more information or to get tickets to Two Mile Hollow, which closes on March 4.
Posted by Compendium at 2:10 PM