Warming and Learning at Isla Tuliro

How much do you know about the Philippines, really?


These are just a few of the many fascinating facts you will learn in Isla Tuliro (and their wonderfully detailed program), the new world premiere play being presented by Pangea World Theater and Teatro del Pueblo. Through a lyrical two acts, Isla Tuliro tells the story of the history of the Philippines and the Kayumanggis tribe, particularly after colonizers arrive. We learn of the Kayumanggis' peaceful life, the brutal ways they were subjugated, the strong resistance they showed, and many beautiful moments about the Kayumanggis culture, music and language. While a few things can get lost in translation - there are at least three languages competing at any given time, and a preponderance of narrators can make it a little hard to know who is leading the narrative when they are all speaking at once - the gentle choreography from Sandra Agustin evokes the action clearly and leads us through the story. It's a long overdue story to reach mainstream America, and I really hope a wide swath of audiences come to see it at the Southern before it closes on April 22.

The cast is composed of a vibrant mix of actors from the Pangea and Teatro del Pueblo companies, and they mix very well. It's clear from the get-go that developing Isla Tuliro was a truly collaborative process, and I hope more companies are inspired to work together after this show. My absolute favorite performer was new-to-me Lita Malicsi, the lead narrator and an all-around delight. Malicsi harnesses all the power of her ancestors to guide us through Isla Tuliro with grace and gravitas, and I could have listened to her perform solo for hours. Likewise, Lyra Hernandez does a great job supporting Malicsi's narration and adding energy to the action on stage. Mary Ann Prado displays wisdom and strength as the Kayumanggi ruler Diwa, and I only wish we had more of a chance to see her exercise her leadership strength in the story.

One of the things about Isla Tuliro that immediately struck and impressed me was how clearly this was the vision and execution of women of color. Written and developed by Marlina Gonzalez, the plot flips traditional narratives of U.S. presence abroad and immediately focuses on the people most impacted by our actions there. A feeling of collaboration and genuine warmth flows through the cast, which is 75% female, and it shows in the energy on stage. The creative team is also dominated by women and people of color, and I think this intentional creation of an inclusive, multifaceted vision and crew really helps solidify the unique feel of this play. The sets are super simple, mostly composed of silky sea kaleidoscope hanging backdrops, but they're used to maximum effect with the benefit of some gorgeous night time lighting, spirited sound design and music, and some lovely shadow puppets from local resident master puppeteer Masanari Kawahara. The overall show reminded me a little bit of The Oldest Boy, one of my favorite things I ever saw at the Jungle Theater, and that feeling of a strikingly honest narrative told with a clear eyes yet a comforting feeling is something I would love to see more of around the Twin Cities.

Isla Tuliro is the first show I've had the pleasure of seeing by either Pangea World Theater or Teatro del Pueblo, and I can confidently say that it certainly won't be my last. The heart, vision, and truly inclusive nature of Isla Tuliro is a sign of companies who are leading the way to continue to diversify our stages and uplift exciting new narratives, and who doesn't need more of that in their life? There's no better show to help warm your snow-in-April-cold heart than Isla Tuliro, and its beachy vibes and important message will linger with you long after you're gone. For more information or to buy tickets, click on this link. 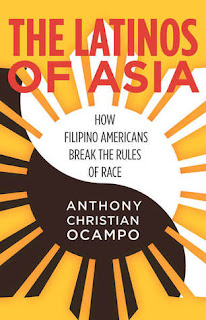 And as a special aside: I haven't read the book above yet but I was so delighted to discover its existence a few weeks ago. I imagine it might be a great companion to this show if you're interested in learning more about the Filipino-Latinx crossover. Click here to learn more.