If there were one sentence to describe Chicago, it would be "sex on stage." 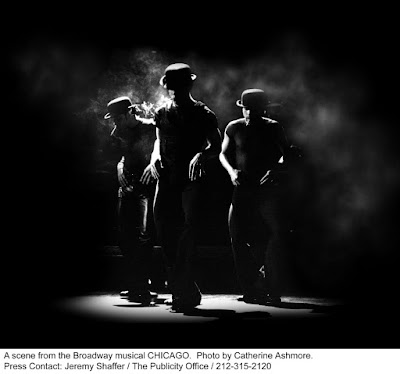 I've seen many sultry shows in my time, but little compares to the sensual explosion that is Chicago. From the barely there costumes to the musical sighs to the iconic Bob Fosse choreography, Chicago oozes sex through every pore.


If you're not in the loop, Chicago tells the story of the murdering women in the Cook County Jail in the 1920s. There are women there for many reasons; some had cheating partners; some had men with annoying habits; only one of them is innocent. The plot centers on the competition between two inmates, Velma Kelly and Roxie Hart, as they try to parlay the fame generated from their crimes into showbusiness careers (once they get free from jail first, of course). It's a riveting competition, one that predicted the incredible fame grabbing happening among social media influencers these days (#kardashians), and it's impossible not to be sucked into the all-out lengths each woman would go to in order to maximize her paparazzi moment.


It's been a while since I've seen the stage version and I was excited to check out the Broadway tour at the Orpheum this week. All of the classic elements are there, from "All That Jazz" to "Cell Block Tango," and the audience went wild for it. However: I'm not sure why, but this cast didn't hit my sweet spot. I thought Dylis Croman had a great sly delivery as Roxie Hart and Jennifer Fouche had a delightful swagger as Matron "Mama" Morton. The dancers are all extremely talented and step in time. But something about Terra MacLeod as Velma Kelly just didn't do it for me. I've been a solid fan of Chicago since I saw the incredible 2002 film with Catherine Zeta Jones, and I think I was looking for a performance closer to hers. MacLeod isn't bad, but it's much more of a physical performance than a vocal one - just not quite for me. Several of the men's performances felt a little dialed in and the chemistry just wasn't there. The audience loved it, so I'm likely alone in my feelings, but this one was missing the spark that always made Chicago such a spunky surprise for me.


One thing I did really enjoy? The set. In a bit of a twist, the band is on stage on a tiered performance platform so we can always see them playing, just like we would a live jazz band in a steamy club. It gives a concert-like effect to the show and definitely helps keep things paced more quickly since no sets need to be moved. I loved watching the conductor interact with the actors as they performed their numbers; it reminded me a lot of watching my dad interact with the high school students acting in the plays he conducted pits for while I was growing up. I don't think pit orchestras often get as much credit as they deserve, so it was awesome to see this one being celebrated front and center.


I was also troubled by some of the audience reactions to the show. It seemed like most of them found Chicago to be... funny? The plot is certainly told with a giant sly wink, and there's a lot of sarcastic banter throughout the show. But the idea of celebrating women for committing murders troubles me; as much as the show has a darkly comic side, the point has always seemed to me that it sheds light on the enormous injustices of our criminal justice system. Innocent people are often incarcerated and punished for crimes they didn't commit; even the most guilty person can get out of sentencing with enough money and influence. Several heartbreaking conclusions are made throughout the show, and even Velma and Roxie come to see the double edged sword of their fame by the end. I must be getting old or something, because I've had similar qualms with other seriously-themed shows playing locally lately. I hate to be a negative Nancy but... I just didn't feel right about the overly jovial atmosphere. I love Chicago; I love that it allows women to be more than precious saints / angels / mothers and embraces the darker side of their complexities; but I also think we can hold that in a more thoughtful place. I'm probably being a Grinch, but I have to be honest.

That said, the rest of the audience went wild for this Chicago, and if you're a previous fan I think you could truly enjoy it. Chicago runs at the Orpheum through June 10, so make sure to get your tickets very soon if you want to check it out. Click on this link for more information or to buy tickets to the show.
Posted by Compendium at 5:11 PM