Some Thoughts on the Inaugural MN Theater Awards

Does an awards show even need actual awards? 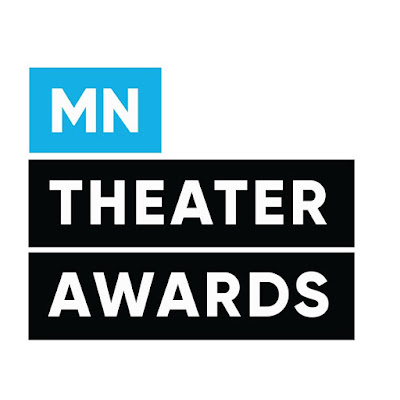 Last night marked the first ever MN Theater Awards, aka The Little Show That Could that took over after the Ivey Awards folded abruptly last year. Many people in the #tctheater community were disappointed by the loss of an event to recognize the excellent work done here every year. Thankfully, Four Humors stepped in to fill the void and reinvent the awards show to make it less difficult (and expensive) to sustain. The approach seemed to be "what would an awards show look like if none had existed before?" I fully support this kind of exercise, and there were lots of changes from previous Ivey Awards ceremonies. Check out the awesome list of nominees here: 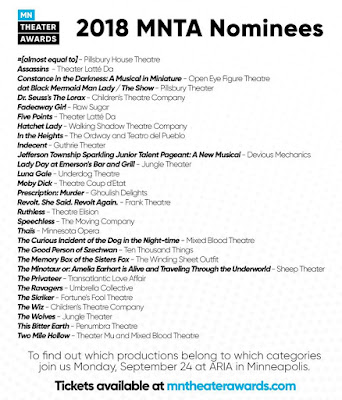 Because this year had such an unusual set of circumstances (the Iveys disappearing, a late scramble to put something together), it doesn't feel right to do a full retrospective as I normally would have for the Iveys. Instead, I wanted to jot down some thoughts about the event and things to think about while planning next year's ceremony. I want to preface all of these comments with a huge thank you to Four Humors for creating and hosting the show. Events this large are never easy to plan in the best of circumstances, and they took the project on with no budget and little time to plan. The fact that they pulled off such a respectable event really deserves credit - so many thanks to them for assuming the responsibility of putting this on!


All in all? I think this was a very promising evening. I'm so grateful that Four Humors took it upon themselves to keep the spirit of appreciation for our local arts practitioners going. It was so fun to see everyone networking and celebrating their hard work over the past year, and to help raise the profiles of some deserving people and companies who are often overlooked. The inaugural MN Theater Awards proved that you don't need fancy sets and trophies to have an awards ceremony; all you need is a happy audience, some willing hosts, and a great crew of nominees to celebrate. I hope this event comes back again next year and am sure it will be better than ever. If you want to follow progress of this group and planning efforts, make sure to follow their Facebook page by clicking here.
Posted by Compendium at 3:04 PM