The Abominables Raises Some Questions

The ambitious new musical from the Children's Theatre Company leaves a lot of food for thought.

I'm always excited to see new work. I truly believe that the future of robust ticket sales for theaters of all stripes lies in commissioning new art that reflects the world around us and challenges us within our modern contexts. 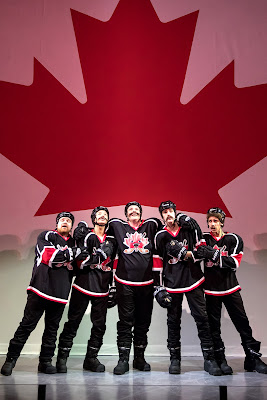 So I was very intrigued to see The Abominables, a brand new hockey-centric musical set right in Minnesota. Commissioned by the Children's Theatre Company, The Abominables had a premise just different enough that I had no idea what it would look like.


Here's the basics: Mitch Munson (played with verve by Henry Constable) has worked all summer to make the A Hockey Team at his school. Just as tryouts are about to start, the team learns that a new kid has transferred in and he's really good. Why? Because he is in fact a Yeti named Harry (played with heart by Ryan Colbert), adopted by Judy (a vibrant Elie Benson) and Hank (a cocky Bradley Greenwald), mountain climbers who found him in the Himalayas. Harry's quirks offput the school at first, but this is quickly laid to rest when they see how good he is. With visions of grandeur and winning against the Canadian Thunder Bay players for the first time ever, the team moves on with Harry on board and with Mitch on the B Team.


This is fine with everyone (except Mitch, of course). Mitch proceeds to spend the show conniving for ways to resume his place on the A Team and rid the school of Harry. Along the way he alienates his younger sisters Tracy and Lily (played with aplomb, wit and charm by Natalie Tran and Valerie Wick, respectively); humiliate his parents Ellen and Charlie (drawn with wicked passive aggression by Autumn Ness and Reed Sigmund); meddle with Harry's adoption by inviting his birth parents to Thunder Bay; and destroy his team's chances of winning after simultaneously sabotaging the B Team and impersonating Harry on the A Team once he finally runs him off. In short, it's a big hot mess, one which is a bit too neatly resolved at the end for the major issues the show raises.


As I can see it, at face value The Abominables has three major themes: teamwork (or lack thereof); bullying and feeling like an outsider; and the role parents play in setting a good example for their kids. When addressed separately, they are a mixed package of success. The show does a great job of showing how rotten these parents are on every level; they connive, they sneer, they gossip, they cajole, they fight, and are all around horrible role models for their kids; no wonder their children have gotten the wrong message! This clarion call (should have,  hopefully) hit each of the parents in the audience; there's a lot to learn from here, particularly for the sports obsessed. The importance and lack of teamwork throughout the show is also pretty clear. Mitch doesn't lose friends and become an outcast because he isn't on the A Team; he walls himself off in a bitter prison of his own making and becomes a mean, spiteful person. Who wants to spend time with that? How can a team win when one of the players won't pass? This theme could have been made a little more explicit, but overall I think it comes through.


The Abominables really loses its way when coming to the third theme, that of the "other" or outsider. There are so many questions I have after seeing this portion of the show: are we more concerned about the fact that Harry is from a foreign place? That he's not human? That he's adopted? There's a lot going on, and the way it plays out through the plot is clumsy at best. I don't think that the show is trying to make any very negative metaphors about foreign humans being animals or adoption happening because birth parents are lazy or neglectful (at least I certainly hope they aren't; I've never seen such a message from the Children's Theatre Company and I have faith that any such subtext is very unintentional here). But because this story is told from Mitch's perspective (not Harry's), we never get the chance to really understand how Harry feels, which to me is really the person who should be explaining his feelings and addressing the audience. By making Mitch an antihero we lose the chance to straightforwardly address some very heavy (and very relevant) issues such as racism, bullying and adoption, and that's a shame. I don't think the kids who will see The Abominables are going to read all this subtext into the show, but it is something that would concern me as a parent. How would I help unpack some of the issues raised here in a way that a child could understand? What if my child was adopted and saw this show and asked me questions? I really wouldn't know how to tackle that.


There are things that I really liked. The cast is tremendously talented across the board and they really work hard to sell the show. Their musical prowess, especially in the case of the child actors, is very impressive. The set, designed by Andrew Boyce, is reminiscent equally of a large timber lodge and a hockey arena, and it's a really unique design that I found highly compelling. The most interesting part of the show is easily the enormous amount of choreography performed on roller blades, a complex maneuver that was beautifully led and executed by Fight and Hockey Choreographer Ryan Bourque and Dance Captain Stephanie Bertumen. It really works on stage, and I'd love to see some of these techniques in future performances on other stages for other shows.


But I'd be lying if I said I left the theater feeling anything but uneasy. There's a lot going on in The Abominables, and its ambitious scope has so much potential. I hope since this was an original commission that there might be opportunity to straighten out some of the kinks. I may be making a mountain out of a molehill; maybe I'm reading too much into the show and it can be taken at face value as a story of teamwork, and left at that. But with kids I believe you have to be careful and direct, and the confusing questions left by the treatment of Harry, particularly with his adoptive parents, has really kept me pondering. I'd love to hear what your thoughts are.


If you want to see what you think of The Abominables for yourself (and I always encourage this; the crowd seemed very engaged at the show and if they liked it, you might too), you have ample opportunity before it closes on October 15. More information and tickets can be found by clicking on this link.
Posted by Compendium at 6:26 PM